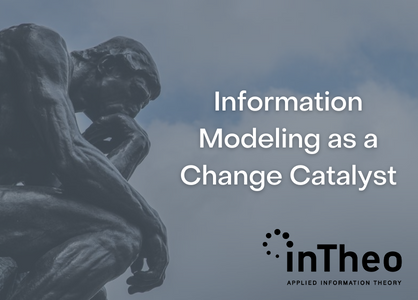 Information modeling as a change catalyst

Can information modeling really drive or support change management? To the unprepared ear it does admittedly sound a bit farfetched. Information modeling is there for IT systems and change management is a managerial task driven by externalities such as technology evolutions, regulatory changes, or market shocks caused by a pandemic and a large-scale war in Europe. Right? Yes and no, but a key message in this reflection is that a comparably limited information modeling exercise can return significant and valuable indicators about areas that would benefit from change actions. It is merely a matter for management of “connecting the dots”.

A very brief background to the concepts addressed in this text is that Information Modeling is an analytical and structuring activity that aims at mapping a given business operation and its business environment into as unambiguous notions as possible. As stated in the preamble, information modeling is often undertaken for the purpose of systems design but can also be used for other development activities such as enterprise architecture design. Change management is a key, as well as continuous, managerial task aiming at ensuring the organization’s adaptivity to changing market conditions as well as changing and evolving internal factors. Change management is often focused on how organizations perceive their role and situations and how tasks at hand are to be dealt with. There are numerous models for hands on information modeling as well as change management work, but this text is entirely focused on the value driving potentials that can be uncovered in the interaction between the two.

This, often-untapped, potential is thus to be found at the crossroads between the IT and the management perspectives of these two concepts, i.e. the type of information modeling aimed at uncovering the actual managerial, as well as operational, decision dimensions of an organization. Such modelings ought to predate modelings that are directly aimed at systemizing data flows or data repositories, but the potential results of these are all too often taken for granted, and hence not carried out often enough. Consequently, these tend to be the “missing links” that render many IT-projects a status of “functioning perfectly”, technology wise, but for some reasons not providing the expected business value. Now, how to relate this to change management?

During numerous information modeling workshops, pre-studies and specification projects aimed at such “pre-systemization” of managerial structures and challenges, strong indicators on need for change have been ever recurring “by-products”. When it happens, it stems from a simplistic, yet “alarming”, revelation among the participants in that they cannot agree on understandable expressions of what the organization is really doing. This effect is unanimous, disregarding the level of management, or subject matter experts, involved in the exercise. Another way of putting this is that there is a lack of a common internal vocabularies by which different parts of organizations can jointly communicate and progress development and market approaches. Still, decisions are taken, but do they result in the actions that were originally intended? A very common answer, when put to the test, seems to be no – at least not close enough, as the original intent has been diluted by unintentional changes due to interpretation differences. A major effect of this is a reduced capability to swiftly react to market changes, internal innovations, and customer feedback.

During an information modeling workshop hosted some years ago, it was revealed that, completely unknown to most, the sales division, the R&D division and the after-market division were operating three very different “product catalogues” with different labeling schemes, all with the intent to communicate to the market the very same, and companywide, product structure. Needless to say, a change initiative was on the way before the end of that day.

Another similar example was a global F500 company that, during an information modeling workshop, realized that they could not agree if the world geography was defined by their organizational structure or if it could possibly be the other way around…

A third example was a company promoting the brand value of flexibility to such an extreme that it was unclear to the information modeling team to what extent the customer dialog should focus on the company’s core offerings or the customers’ wishes to alter that offering to fit their respective needs. The word flexibility was “banned” by the CEO during that very workshop.

The examples above are simply that – examples. The list could be made much longer, and often the change indicators revealed by information modeling initially may seem much more subtle than those mentioned above but when scrutinized, no less important in terms of business impact.

The need for change can derive from any aspect of a business but typical indicators are inefficiency in deliveries, slow or low-quality customer/market responsiveness and perceived lack of competitiveness in the product/service offering/positioning. However, when the matter of change or strategy is addressed, factors of resources (money, brand strength, staff, support systems, etc) frequently take precedence over factors like capabilities, i.e. how to make optimal use of the resources at hand. An extreme simplification would be to say that resources can possibly(!) be mended by means of money and investments while many capabilities need to be addressed by changed organizational behavior in various ways. As well known, one very central aspect of organizational behavior is that of internal transparency, clarity and cross communication. The three examples above illustrate situations where such clarity and channels for transparency and cross communications simply were disrupted due to a lack of common decision structures and vocabularies.

As a “benchmark”, consider emergency services, military operations, police work, etc. No such organization would be able to fulfill its tasks, should it be that the “commanding officers’” orders were repeatedly misunderstood due to “systemized misconceptions” among the receivers. Why then accept that in business and NGO operations in which such ambiguities most certainly, as a minimum, have negative effects on organization KPI’s? Quite obviously, we should not, and the remedy is neither particularly complex nor costly in perspective of the potential gains.

How then to deploy information modeling in this change management context? The key to achieving concrete and actionable outcomes lies in a combined top-down and bottom-up approach. One cannot start by modeling e.g. one of many product lines and hope to achieve a revealing outcome – it has to be a part of a holistic picture. However, when such an overall conceptual structure is in place, after an initial top-down approach, it is very often the case that a series of iterations take place between the “detail level” and the “overall level”, through which the detail level insights tend to reveal inconsistencies in the overall level and vice versa. The number of iterations is merely a function of the required final level of granularity of the map of decision dimensions. Usually though, initial indicators for potential change/improvement needs are identified earlier rather than later in the process, meaning that the exercises can soon direct their focus on the areas where more articulated discrepancies, and consequently further and more detailed indicators of need for change, can be identified.

What’s in it for us?

Why then would an organization decide to spend a series of two-to-three-hour internal information modeling sessions on change diagnostics like this? To some extent this can be compared to a pre-emptive strike on quality, efficiency, and positioning errors. Already existing, but not yet obvious, needs for change can be identified and addressed but even forthcoming such needs can be predicted and mended before they start taking their toll on customer relations and/or profitability levels.

The next question is, of course, if it is worth the effort. As was stated in the beginning of this text, in most cases these outcomes have been by-products of other original intentions but for those who take a modeling approach for the sole purpose of change diagnostics, the “ROI” should prove significant. Indicative figures are of course very case by case based, but imagine a series of three (minimum) to ten (absolute maximum) workshops of maximum three hours each and approximately eight participants in each workshop. This sums up to a span of 72-240 manhours plus workshop management and final analysis. Put in perspective of potential gains achieved by reducing inefficiency and quality failures, in combination with insights enabling gradually improved customer relationship and market positioning, this is a very cheap insurance premium indeed.

Why then is information modeling not used more often for this purpose? Most likely it is just a function of management not “connecting the dots” between information management and change management. Even though both are well known managerial areas, this is very understandable as the two topics are rarely, if ever, addressed in the same contexts and situations.

The intent of this short reflection is thus to inspire management to “connect the dots” and to proceed with the engaging, as well as and outright fun, process of modeling the company’s business reality for improved efficiency. 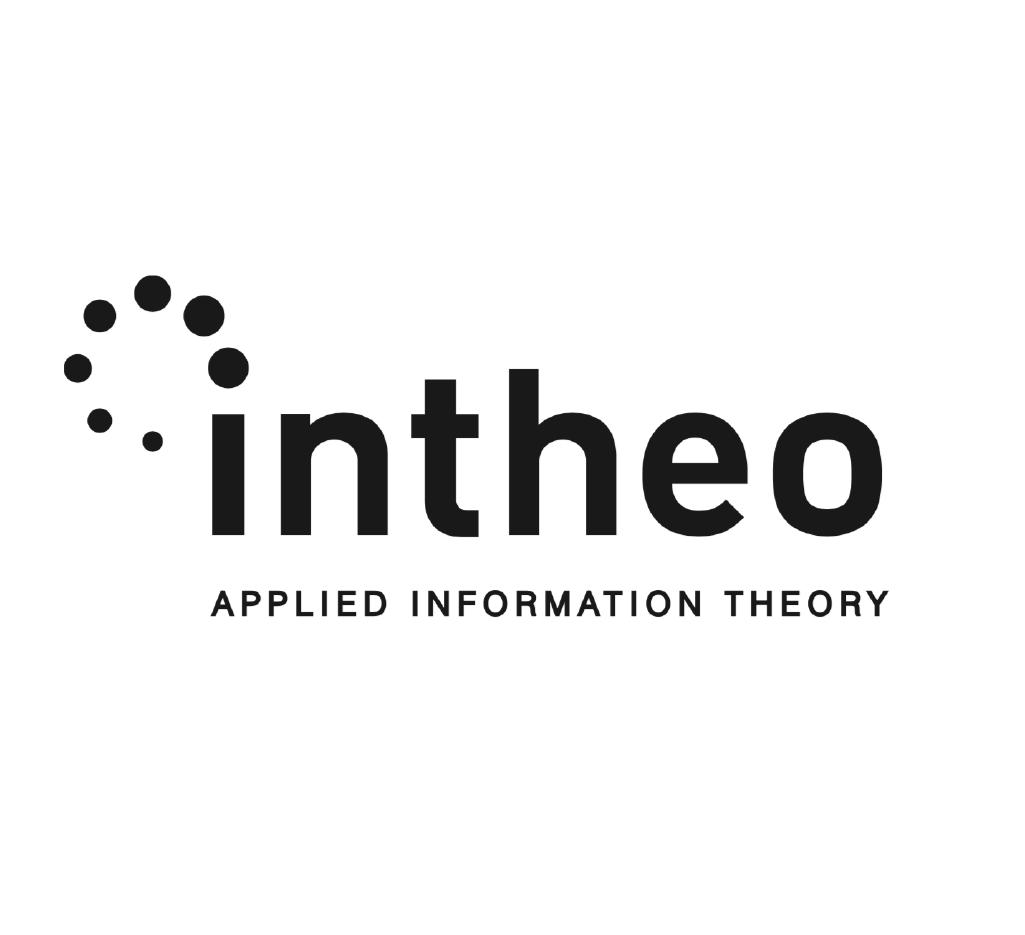